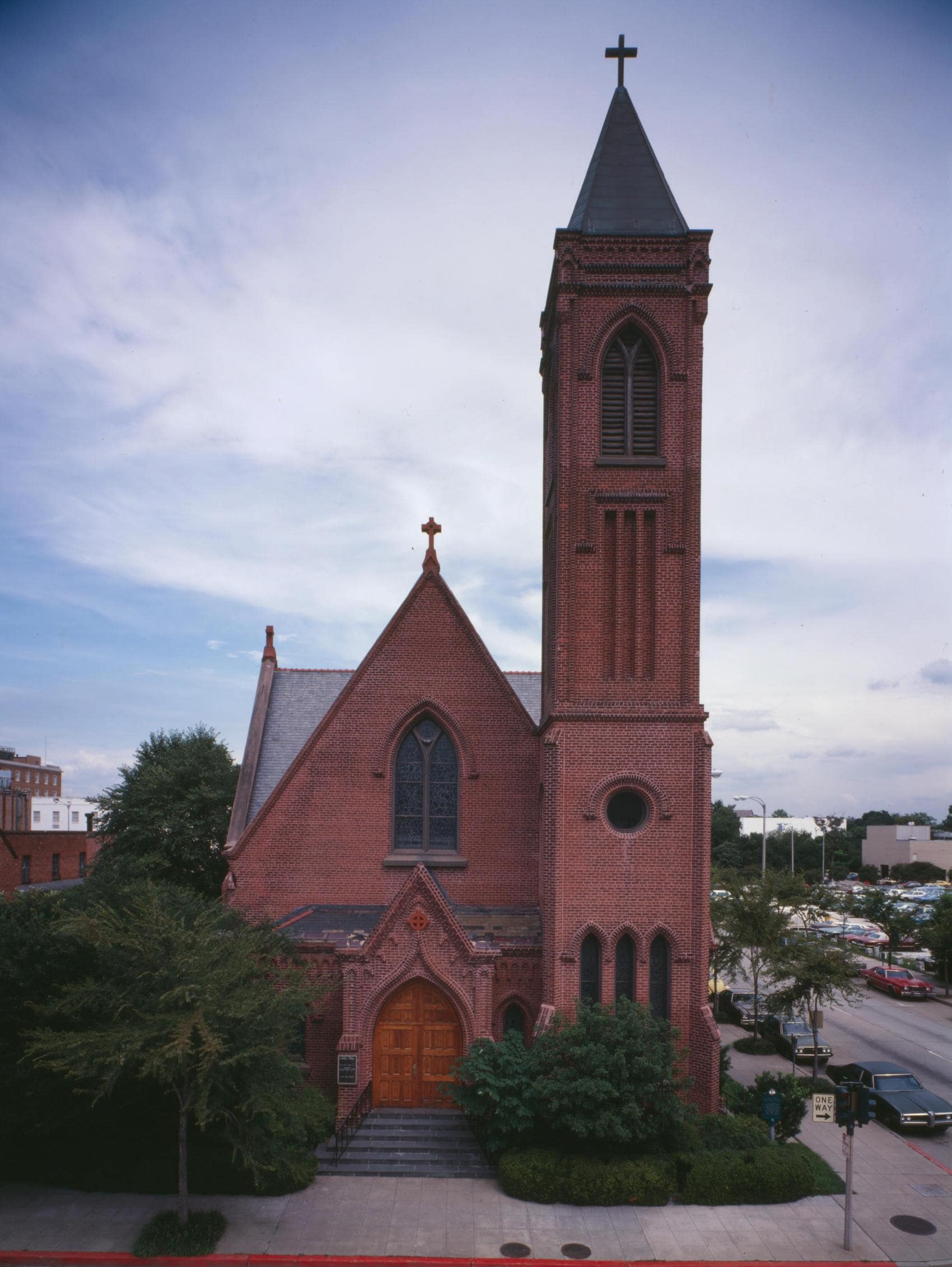 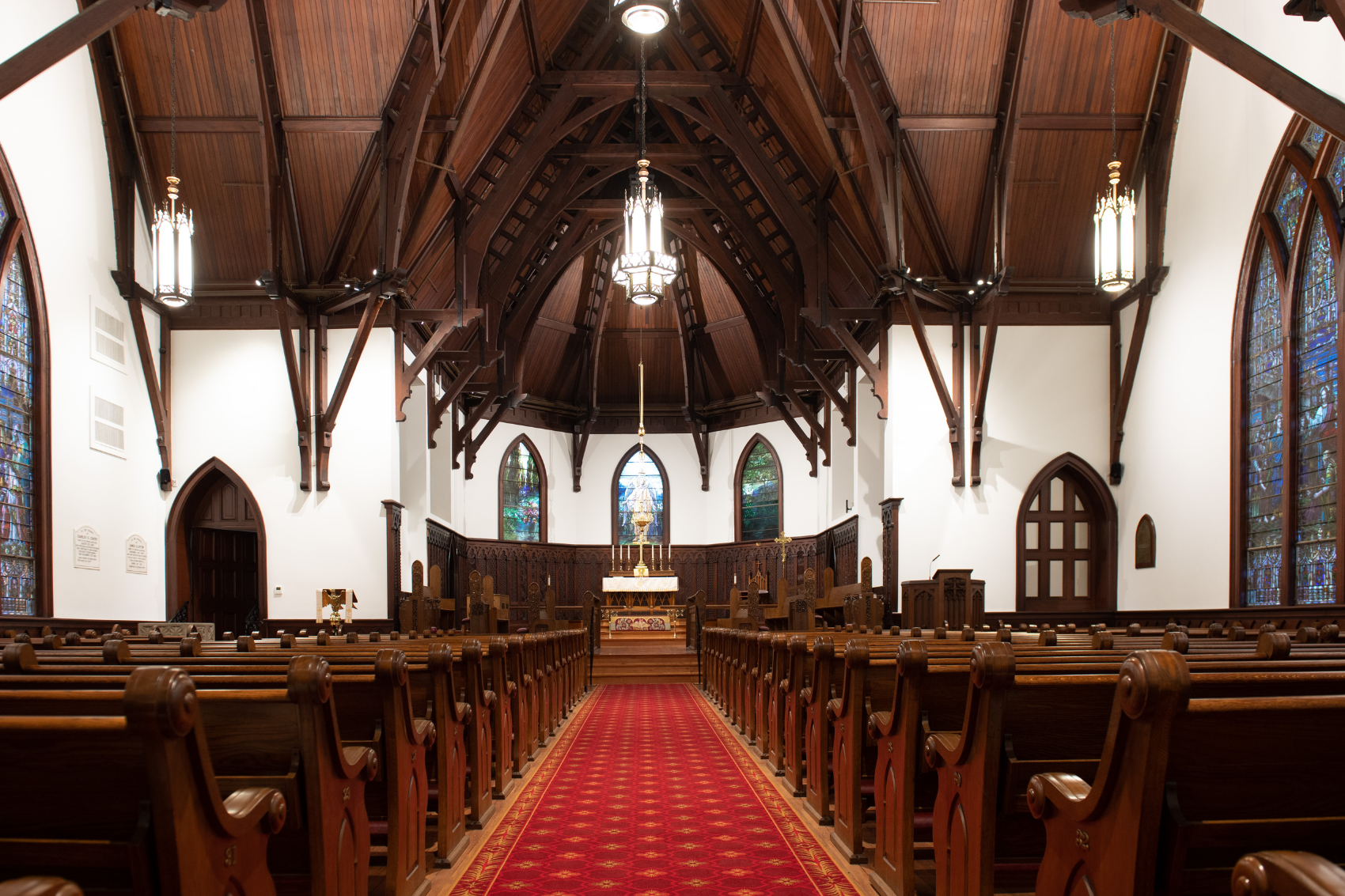 The church’s modern Gothic Revival exterior is softened by a muted pink brick and brownstone and is accented by terracotta decorations. It was completed in 1895 under architect W.L. Stevens, Sr. and contractor W.H. Miller.

Inside the church, a hammer-beam ceiling rises over an interior of pine and cypress.

The chancel is surrounded by Gothic Revival lancet panels, created along with the building in 1895. Thirty-three of the 36 panels were filled with the woodworking craftsmanship of the Rev. Joseph L. Tucker, who worked on the project from 1900 to 1906. The remaining three panels were completed by his son, the Rev. Louis Tucker, who finished the project with the help of the youth group he formed upon his arrival to St. James, where he was called to succeed his father as the new rector.

St. James hired Tipton and Associates at the start of 2019 in order to create a full set of plans that covered top to bottom and east to west (altar to narthex) restoration and renovation of the church building. The priority throughout the planning process was the preservation and restoration of the historic beauty of the church.

The following projects have since been completed:
Repair & painting of plaster throughout the church
Restoration & repair of original wooden floors with carpet runners up the aisles in the nave
Update to electrical system
Upgrade to lighting throughout the church
Replacement & upgrade of HVAC system
Purchase of a new organ (coming Spring 2021)
Improvement of the exterior landscaping and drainage around the church
Installation of a fire suppression system to protect the building
Restoration of wooden pews and wainscoting
Improvement to the sacristy lighting, sink, & countertop
Repair of needle work & restoration of brass

A halo of three original Tiffany windows, created by the Tiffany Studios site located in New York, encircle church altar and features the Angel of the Resurrection surrounded by Easter lilies, encircled by two images of the Garden of Gethsemane.

Louis Comfort Tiffany famously worked with glass, metalwork, pottery and furniture. His stained-glass windows were renowned for their creativity and craftsmanship, and he produced them for churches, institutions and homes from 1877 and well into the 1920s.

The windows were delivered to the church in February of 1910. William Connell, a vestryman and prominent attorney, was granted approval from the Vestry in 1909 to donate the windows in honor of his wife and mother-in-law, Eleanor Garig Connell and Elvira Doughert Garig, respectively. They were formally dedicated in 1910, on Easter Sunday.

All Tiffany glass was personally manufactured, and his trademarked mottled glass appears in the Angel of the Resurrection design.

Beyond the three Tiffany windows, memorial windows were commissioned from the Jacoby Art Glass Company of St. Louis. The completed windows were dedicated on May 9, 1948, with each window illustrating a different Gospel story. In the north transept, the lancet windows include the following, counter-clockwise to the rear: the Nativity; Jesus as a child teaching in the temple; the baptism of Jesus; and Jesus healing the sick.

The south transept window depicts the triumphal entry of Christ into Jerusalem. A single rose window is located above each of the transept windows: the Agnus Dei is shown in the south, while an open Bible emblazoned with the Greek alpha and omega appears in the north above the nativity illustration. At the west end of the church, a double lancet window depicting the Ascension of Christ can be found. 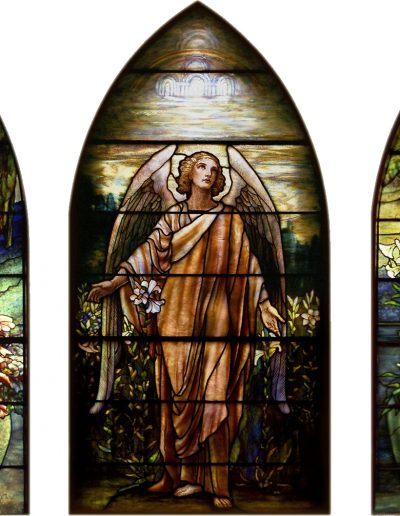 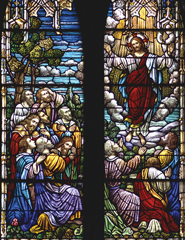 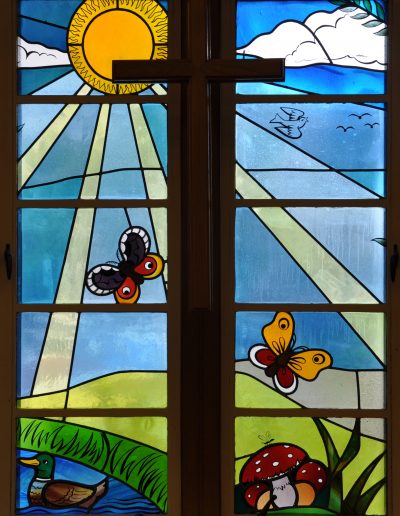 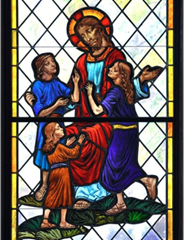 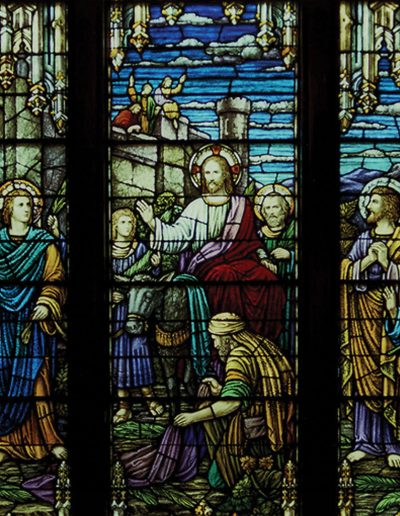 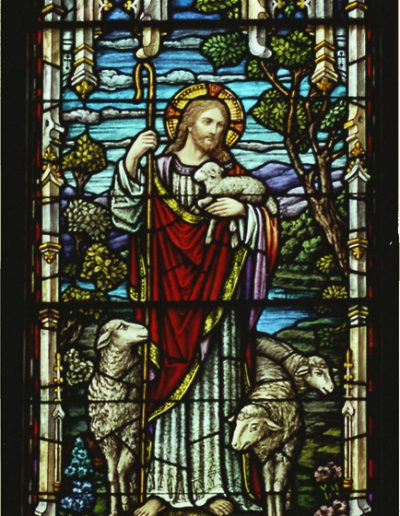 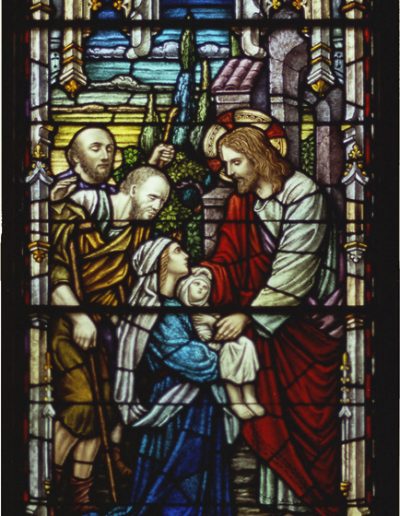 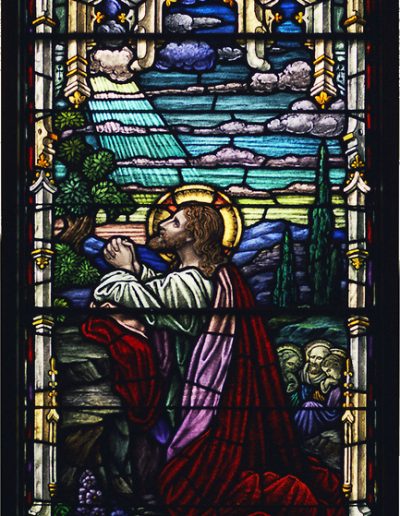 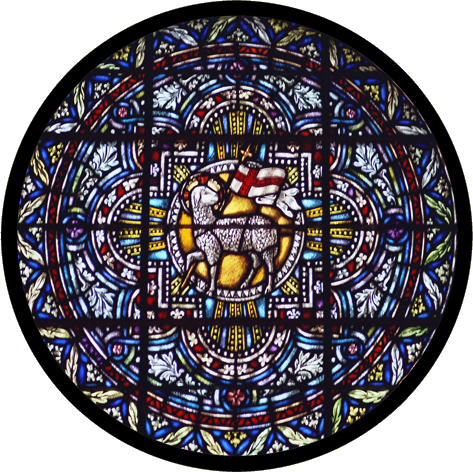 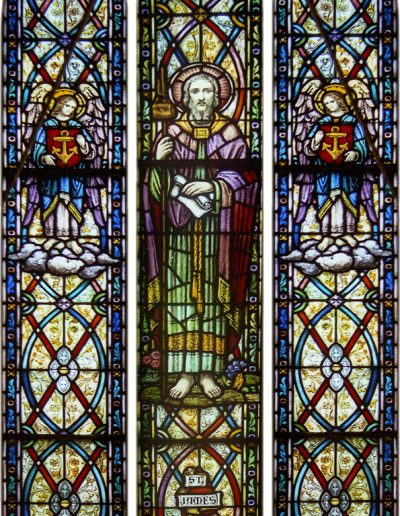 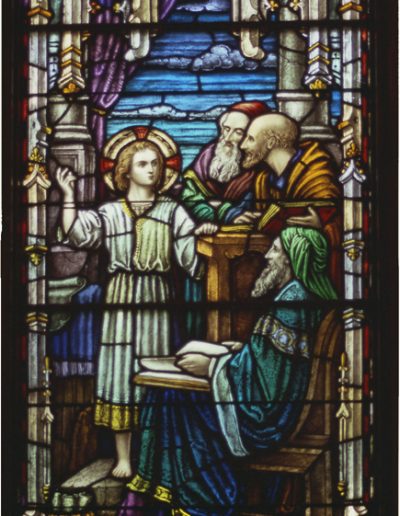 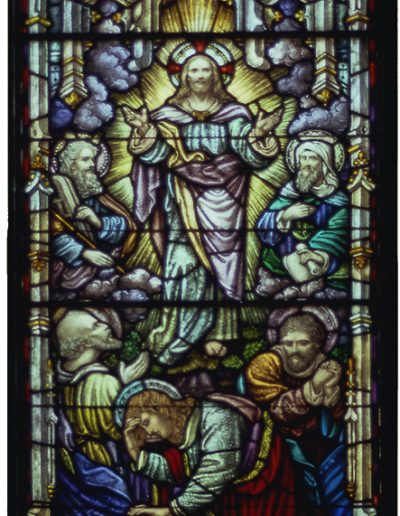 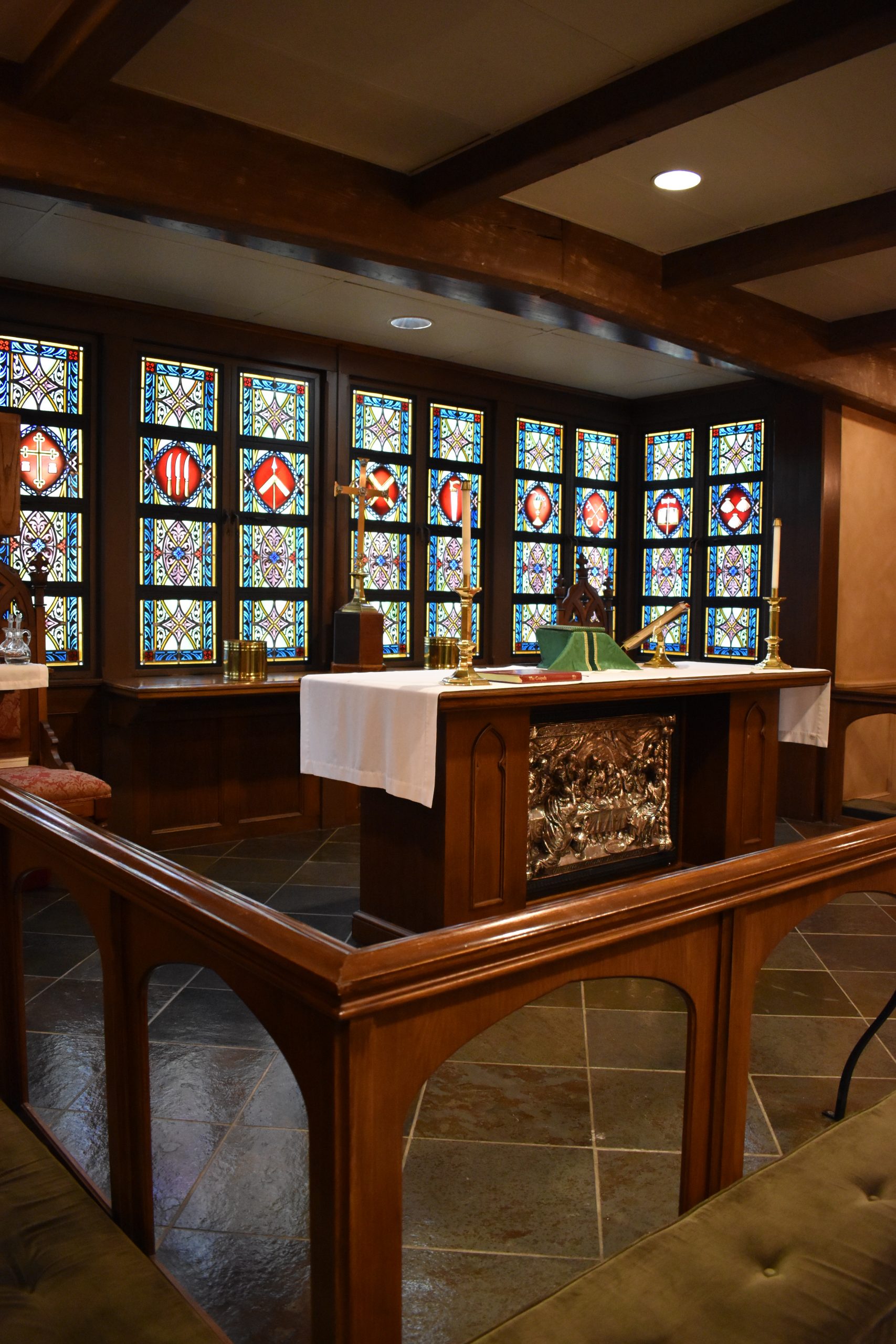 The Chapel of the Twelve Apostles

The Chapel of the Twelve Apostles features a box bay window depicting the symbols for each of Christ’s apostles.

In addition to the church and chapel, St. James church grounds contain the following buildings:

Parish Hall: Our Parish Hall, adjacent to the church, is a multi-use building with space for Day School classrooms, a cafeteria, the church nursery, a brides’ room, and the Chapel of the Twelve Apostles, and Coleman Hall (a formal parlor for social gatherings).

Bishops Hall: Bishops Hall, located beside the Parish Hall, is a gym and a multi-use facility. The Day School uses the gym daily for physical education classes. Large gatherings for the St. James community are also held there.

Killgore Hall: Killgore Hall, located behind Bishops Hall on the corner of Fifth and Florida streets, is home to the Early Childhood Development Center (ECDC) for our youngest Day School students.